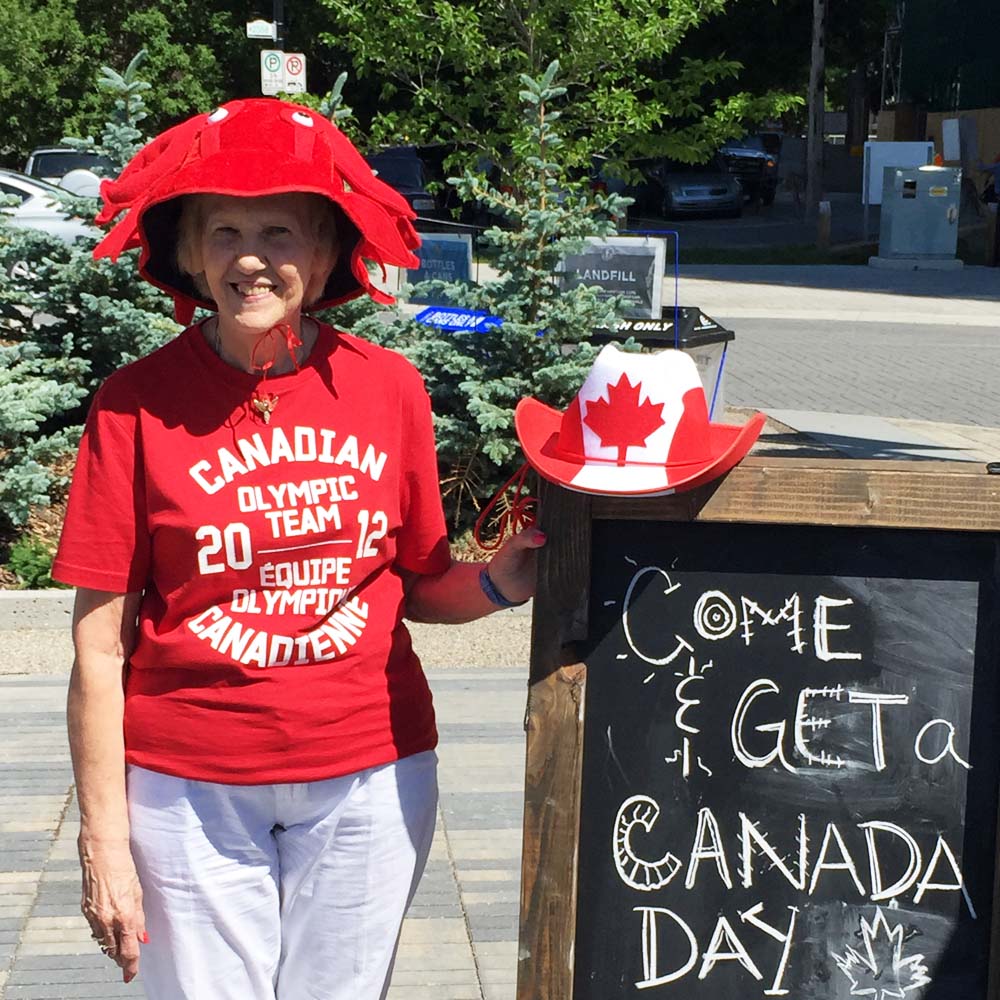 Thank goodness Mother Nature decided to behave for this year's Canada Day! Considering we had some of the scariest thunder and lightening the night before ... Canada Day 2015 was one for the books ... especially in Downtown Calgary's East Village!

People from all walks of life (young and old) made their way to the East Village to take in the sights, sounds and tastes with the East Village Street Fair and the Show & Shine Classic Car Show. This vibrant community played host to a wide variety of vendors, local artists, including art exhibits from the Drop In Centre and the Salvation Army, local bands and musicians, buskers and service providers (i.e., TD CanadaTrust, Telus, RED 106.7FM) that have supported Calgarians for many years. In addition, the Golden Age Club opened up their air conditioned room to passers by looking for some fun arts and crafts!

5th Street Square was painted red (i.e., t-shirts, shorts, tank tops, hats and sunburns) and was home to a wide variety of performers, singers and dancers under the midday sun. The East Village was "human powered" as people made their way to the village to check out the facilities on their bikes, with rollerblades strapped onto their feet or simply by putting one foot in front of the other to check out what all the fuss was about.

One spectator, in particular, caught my eye as she was covered in red from head to toe ... including her lobster-shaped hat! Joanie Lapidus, the East Village's longest residing citizen (living in the area for over 28 years), was in her Canada Day best, including a smile from ear to ear! After moving to Calgary from the Maritimes 28 years ago, she says it's exciting to see the East Village start to take shape from her tenth floor apartment! She sees the construction workers hard at work (even on Canada Day) making the East Village beautiful!

One of my favourite vendors was the Hip Image Mobile Photo Booth. This funky, bright blue restored VW van is where individuals and groups can get in, put on cool props and take some digital pictures (like a mobile photo booth) for some 5th Street Square memories! You couldn't walk by the van without hearing giggles and as Jo Williams could document unique memories for Calgarians in the East Village.

And ... at the very end of the day I came across Margarita's Design, known for her flower arrangements and design, but who was showcasing some beautiful and colourful fashion accessories and art as the East Village Street Fair was closing down at 4:00pm.

Although I didn't get a chance to make it to the Shine & Show Classic Car Show (because I only made it half way through all the vendors at the Street Fair) I did spend a bit of time over at Factory Supply Co. and their hot rod culture inspired graphic products, signs and t-shirts!

Next year I'll just have to come back for Canada's 149th birthday, the Show & Shine Classic Car Show and Joanie's 29th year as an East Village resident! 364 DAYS AND COUNTING!!

(This post was originally published on www.sixfootcanasian.com on July 3, 2015)