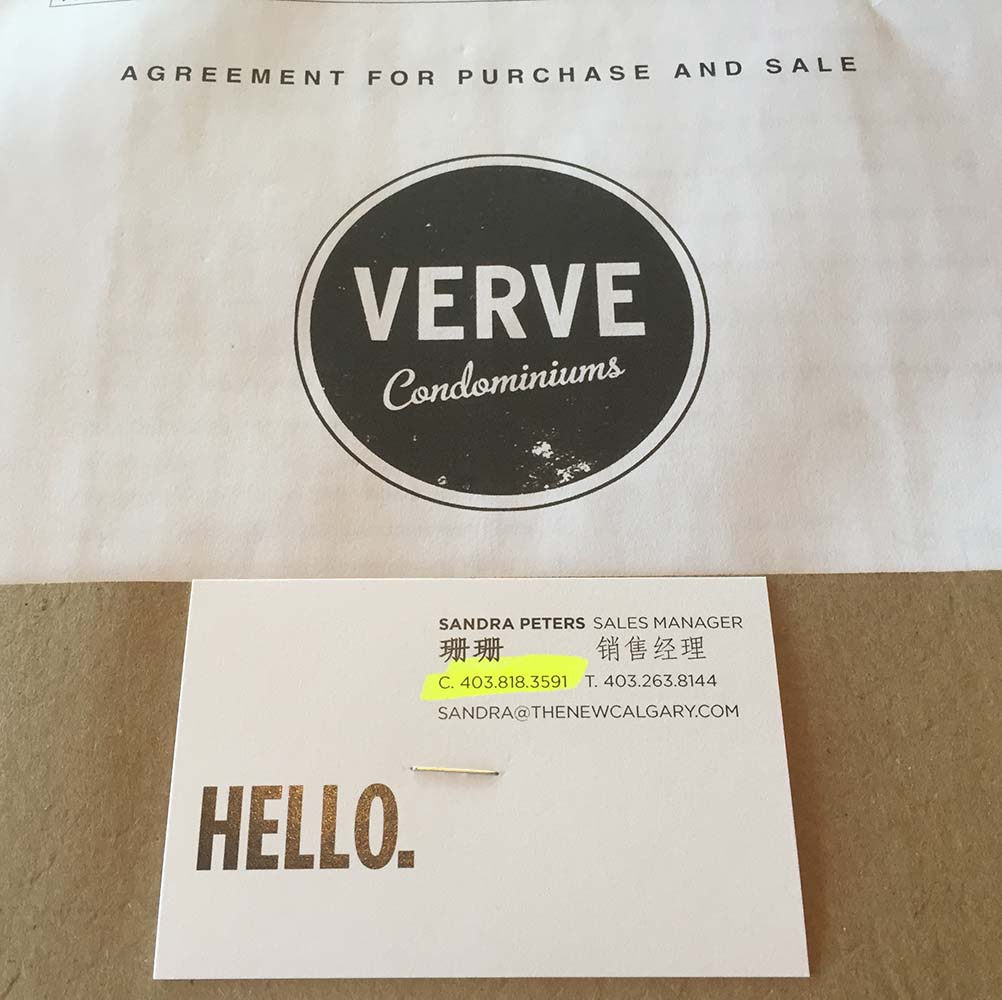 Hello. My name is Andrea Oh ... and it has been two ways since my last blog post (or "confession"). It's been eight days since I first set foot in the East Village and six days since my first meeting with Sandra Peters at the East Village Experience Centre and today we met again. After researching all the amazing projects planned for Downtown Calgary's East Village and spending time exploring the area and getting to know the people who live and frequent the community there was only one thing to do ... sign the paperwork and drop off the downpayment on a new Verve Condominium!!

In any other situation, making a decision in just over a week to commit to the purchase of a new home doesn't sound like much (and may be irresponsible). But, in this case, I feel as though I have put in more time and effort truly researching the community than any other time I've purchased property! To be honest, the East Village "had me at HELLO!". I went in with no expectations and have been continually impressed and surprised with everything new I see and experience! The show suites got my attention but the quality and integrity of all the people and organizations I've been introduced to in this process is what convinced me this decision was the right one.

With that being said, I am MORE motivated than ever to be the East Village's very first Resident Ambassador! This is not just an opportunity to live in the coolest neighbourhood in the city (at no cost), or to attend the most sought after events and rub elbows with Calgary's elite crowd. I want to be the East Village Resident Ambassador because I believe the community needs someone who can help Calgarians (and the world) embrace everything that the community is doing to make a difference ... in addition to providing over 11,500 Calgary residents a safe, secure and beautiful new place to call "home".

The "cherry on top" would be the opportunity to spend a year in the community and getting to know my future neighbours before I take possession of my Verve condominium in 2017. Besides, I'm going to be camped out in the East Village once construction begins (documenting everything as Verve goes from a hole in the ground to 20+ stories high)! Being the East Village Resident Ambassador would give me the opportunity to be both a mature voice communicating the mission and strategy of the Calgary Municipal Land Corporation and the City of Calgary's long term plan ... and to ensure the residents of the East Village are informed of everything the community has to offer them ... by someone who shares their thoughts and concerns!

WHOA! I think I need to sit down and catch my breath. ;)

Now it's time for a glass of wine to celebrate before the REAL WORK begins. Stay tuned!

(This post was originally published on www.sixfootcanasian.com on June 22, 2015)